Founder of the Republic

"Sovereignty belongs unconditionally to the people." 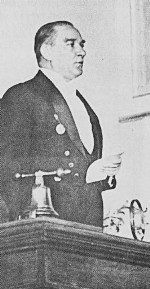 October 29, 1923 is a fateful date in Turkish history. On that date. Mustafa Kemal Pasha, the liberator of his country, proclaimed the Republic of Turkey. The new homogeneous nation-state stood in sharp contrast to the multi-ethnic Ottoman Empire out of whose ashes it arose. The dynasty and theocratic Ottoman system, with its Sultanate and Caliphate, thus came to and end. Atatürk's Turkey dedicated itself to the sovereignty of the national will - to the creation of, in President's words, "the state of the people ".

The Republic swiftly moved to put an end to the so-called "Capitulations ", the special rights and privileges that the Ottomans had granted to some European powers.

The New Turkey's ideology was, and remains, "Kemalism", later known as "Atatürkism". Its basic principles stress the republican form of government representing the power of electorate, secular administration, nationalism, mixed economy with state participation in many of the vital sectors, and modernization. Atatürkism introduced to Turkey the process of parliamentary and participatory democracy.

The first Moslem nation to become a Republic, Turkey has served since the early 1920s as a model for Moslem and non-Moslem nations in the emerging world.