"The governments most creative and significant duty is education."

Atatürk regarded education as the force that would galvanize the nation into social and economic development. For this reason, he once said that, after the War of Independence, he would have liked to serve as Minister of Education. As President of the Republic, he spared no effort to stimulate and expand education at all levels and for all segments of the society.

Turkey initiated a most ambitious program of schooling children and adults. From grade school to graduate school, education was made free, secular, and co-educational. Primary education was declared compulsory. The armed forces implemented an extensive program of literacy. Atatürk heralded "The Army of Enlightenment". With pencil or chalk in hand, he personally instructed children and adults in schoolrooms, parks, and other places. Literacy which had been less than 9 percent in 1923 rose to more than 33 percent by 1938.

Women's education was very close to Atatürk's hearth. In 1922, even before proclaiming the Republic, he vowed: " We shall emphasize putting our women's secondary and higher education on an equal footing with men." 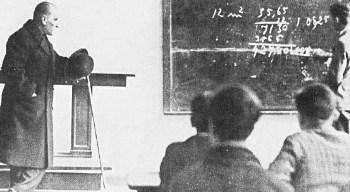 To give impetus to science and scholarship, Atatürk transformed the University of Istanbul (founded in the mid-15th century) into a modern university in 1933. A few years later, the University of Ankara became into being. Today, Turkey has major universities all over the country. Except for Europe and North America she has one of the world's highest ratios of university graduates to population.